The rain has passed for now and the weather reached a beautiful 65 degrees today with a sunny afternoon creeping in through the dissipating clouds. With evening temperatures just warm enough to get us thinking about the grill, we decided to go for it and fire up the big green Webster. It didn't quite feel like a kabobs kind of night. Despite being tempted we decided to save that for a summer evening still to come. Instead, we decided upon a heartier meal-- pizza.

We first had grilled pizza at a friend's house last spring and it was delicious. We had it again last summer, over a wood fire during a camping trip with my parents at Ontario's Pancake Bay Provincial Park-- an amazing spot along the Lake Superior coast. And once in the fall on our own grill. Now that winter has passed, this delicious meal has made it's way back onto the menu.

Whenever I make pizza, I make my own dough, so this was no exception. It is a simple recipe with only four ingredients-- flour, water, yeast, and salt. (I would give you the exact recipe, though I feel as though it is someone sacred considering that it is the same recipe my mother uses to make her baguettes at her bakery.) While the dough is rising, Andrew fired up the grill in order to be sure we had nice hot coals just in time for baking-- or I guess in this case grilling.

Then it was time to make the sauce. A bit of this and a bit of that in terms of spices, but one thing that I have found that makes my sauce extra special is extra garlic and a few extra glugs of red wine. While the sauce was simmering, I sliced some fresh mozzarella, tomatoes, and green onions. Meanwhile, I fried a few pieces of bacon. Once all of my ingredients were ready and the grill was hot it was time to shape the dough.

I decided to make two pizzas so I cut the dough in half and shaped it on a floured counter top. I placed the dough on the grill for about 5 minutes-- just long enough to get a little crispy and brown. Next, I flipped the partially baked dough upside down onto a floured baking sheet, topped the dough with my sauce and toppings, and popped the pizza back onto the grill for another 5 to 7 minutes. An in a matter of minutes we had two delicious pizzas-- one tomato, fresh mozzarella, and pesto. The other spinach, bacon, and green onions. The pizza was delicious and was the perfect meal to warm us up just as a cool chill began to settle on the night.

My chair project was put off this past weekend due to rainy weather. I've been doing most of the work outside on my back deck since it involves sanding and finishing, or inevitably sawdust and stain fumes. So instead I decided to work on another upcycling project.

There are several wonderful architectural salvage warehouses in Baltimore. My favorite is Second Chance which is not just one, but I believe five huge warehouses nestled between M&T Bank Stadium, I-95, and some railroad tracks. What I love about Second Chance is that they have a different warehouse for different subcategories of architectural salvage. One warehouse, for example, is all furniture and stained glass. Another is doors, windows, and the like. A third, and perhaps often most interesting, is architectural elements. This warehouse features anything from old tin ceiling panels to beautiful stair railings to antique walk in refrigerators.

The last time I went to Second Chance, I spent some time sorting through old vintage door knobs and cabinet knobs. All of the different knobs were so much fun that I bought them on a whim knowing that I would surely find a project that would work with them. I eventually decided to turn these lovely knobs into cork wine stoppers. After purchasing the corks, I used the vintage knobs paired with a copper plumbing cap to create my finished product. These particular wine stoppers are currently listed on my Etsy shop. For now, enjoy the wine stoppers in the photos below! 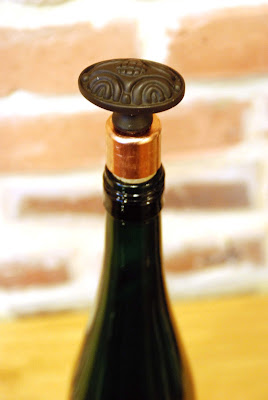 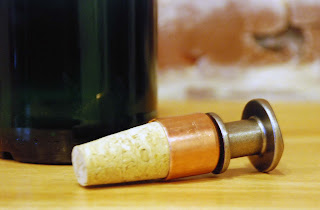 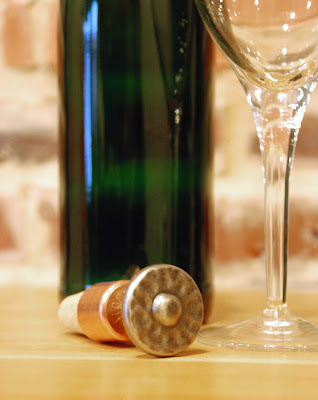 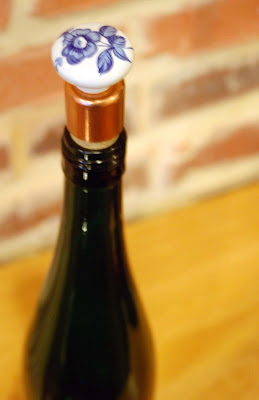 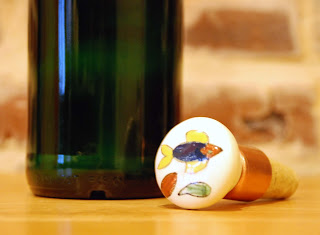 Recipe Cards Come with the Territory

As I was cooking up another fabulous dinner the other night, it dawned upon me that there was something missing from my collection-- recipe cards! It seemed so obvious and I couldn't believe that I had not previously thought about designing some fun little cards to organize my recipes! Really it only seemed natural that this sort of thing should be created. So I spent a day home sick with a nasty sinus infection designing these quite stylishly modern recipe cards.

So far they have been a hit! I only listed them on my Etsy shop yesterday and I sold a set of the Avocado recipe cards and many people have expressed interest in them. They were really quite fun to design! With the avocado colored cards, I kept in mind colors of the kitchen (notably the greens and browns of the avocado). I like these the best of the two sets I created and am looking forward to designing more food color inspired recipe cards. I am thinking eggplant, butternut squash, strawberry, and other such rich and vibrant colors.

Last time I wrote about starting on a new set of wine corks. That is still in the works. It seems at times my creative juices begin flowing so much that I get caught up in new ideas. The wine corks will be made as I was happy with the original few that I made in December. It may just take a while longer than expected to get back on track with my project schedule! But in the end, I guess that is the fun of such creative endeavors-- the ability to stem from one project to the next. For now, I'll be designing more recipe cards tonight, and be using them in my kitchen tomorrow.


Honestly, there is nothing better than waking up in the morning to find that school has been cancelled due to snow. And the one thing that is better is waking up the second snowy morning to another email announcing a second snow day. I really am enjoying the extended ‘mini vacation,’ so to speak!

Back to sleep I go, but only for a short while as I am awakened an hour later by wet dog kisses from our energetic chocolate Labrador, Lilah. Somehow Lilah knows that she gets to spend another entire day with her mama and is just as excited as I am for this glorious snow day! I lumber to the downstairs of our row house in sweats and start in on cup-of-coffee-number-one. Part of enjoying my coffee is choosing the right mug to drink from, and today I have chosen a hand made mug thrown by potter Fred Driver. The mug was a ‘just because’ gift from my mom when I visited home in Indiana in late October, and it has quickly become one of my favorites. I own several other mugs by Fred and I don’t think there is a mug he could make that I wouldn’t like!
Today’s coffee is organic Mexican, a gift from my sister sent straight from her place of work—Rocky Mountain Coffee Roasters in Frisco, Colorado. Roasters, quite honestly, has some of the country’s best coffee. At first I thought that the coffee only tasted better because on the first tasting I was basking in the summer morning sun outside of their shop, taking in the fresh mountain air, and soaking in the amazing mountain view. However, upon tasting the coffee in Baltimore sans romanticized mountain-esque images, the coffee is pretty much just as amazing as it always is in Colorado!
As a former barista for seven years, I tend to consider myself a bit of a coffee lover (or some may say coffee snob) and hope, eventually, to open my own coffeehouse. It’s all part of my big 5-10 year plan. Coffee is a huge deal for me as you can see and so when I moved to Baltimore, finding the perfect coffeehouse was a number one priority.
Perhaps my favorite place to get coffee in Baltimore is a café in the Federal Hill neighborhood called Spoons. Spoons is a fabulous coffeehouse and café which serves freshly prepared food with organic and local ingredients, and their coffee is absolutely fantastic! Unfortunately, I don’t make it to Spoons enough for coffee because they are a drive away. They have become a favorite for brunch or lunch as their sandwiches and salads are always spectacular.  And during the oppressively hot and humid Baltimore summer, I have been known to drive across the city just to pop in for an iced coffee. I am pretty sure they brew the best iced coffee known to man!
During the summer months, we often shop on Sunday mornings at the Baltimore Farmers' Market. Shopping for fresh fruit and produce that is in season becomes more enjoyable with a cup of Zeke’s Coffee in hand. While Zeke’s has a retail location, I don’t make it there often because it is in a different neighborhood that is a bit out of the way.
For my own convenience, I usually grab my coffee from our neighborhood coffeehouse, Patterson Perk. Cleverly named because of its location across from Patterson Park (and maybe perhaps stealing the idea from Friends Central Perk), the Perk is a tiny little coffeehouse in a corner row house. While indoor seating isn’t ideal, the outdoor seating is suitable for spring, summer, and fall. The Perk is dog friendly and so it becomes the perfect stop-off on a summer weekend morning dog walk with Lilah.  In fact, Lilah loves the place so much that she now dashes up the front stoop toward the door every time we pass on a walk, whether or not we intend on grabbing a cup of joe. “Silly girl!” we exclaim. “We’re not going to get coffee today!” Labs are incredibly smart and she must certainly remember the tasty dog treats the Perk gives their loyal canine customers!
And while my second cup of coffee of the morning comes to an end, I have been inspired to continue sharing my favorite coffeehouse around the world. I will certainly share more of my favorites in the future! But for now, I leave you with a silly little coffee cinquain poem that I wrote with my students in class last week.
CoffeeCreamy, smoothBrewing, steaming, sippingOh so very tasty!Latte