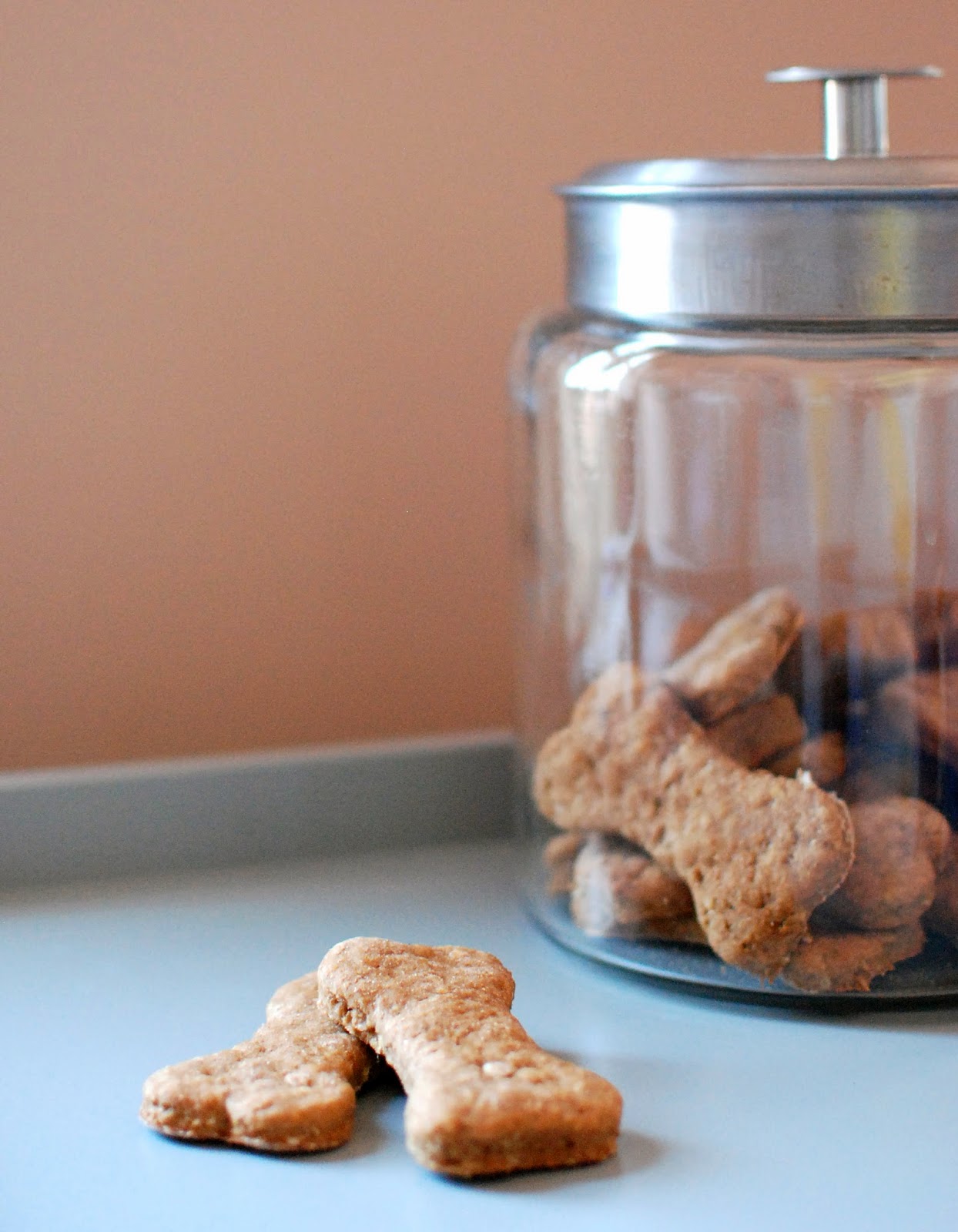 This past Sunday was Lilah's fifth birthday. While she is starting to grey a little in the chin, when most people ask us how old she is, they are shocked to find out that she's not one or two years of age. We've been told by many of our friends that she has mellowed out considerably in these five years, but she truly is one of the happiest dogs I've ever met and just doesn't slow down. 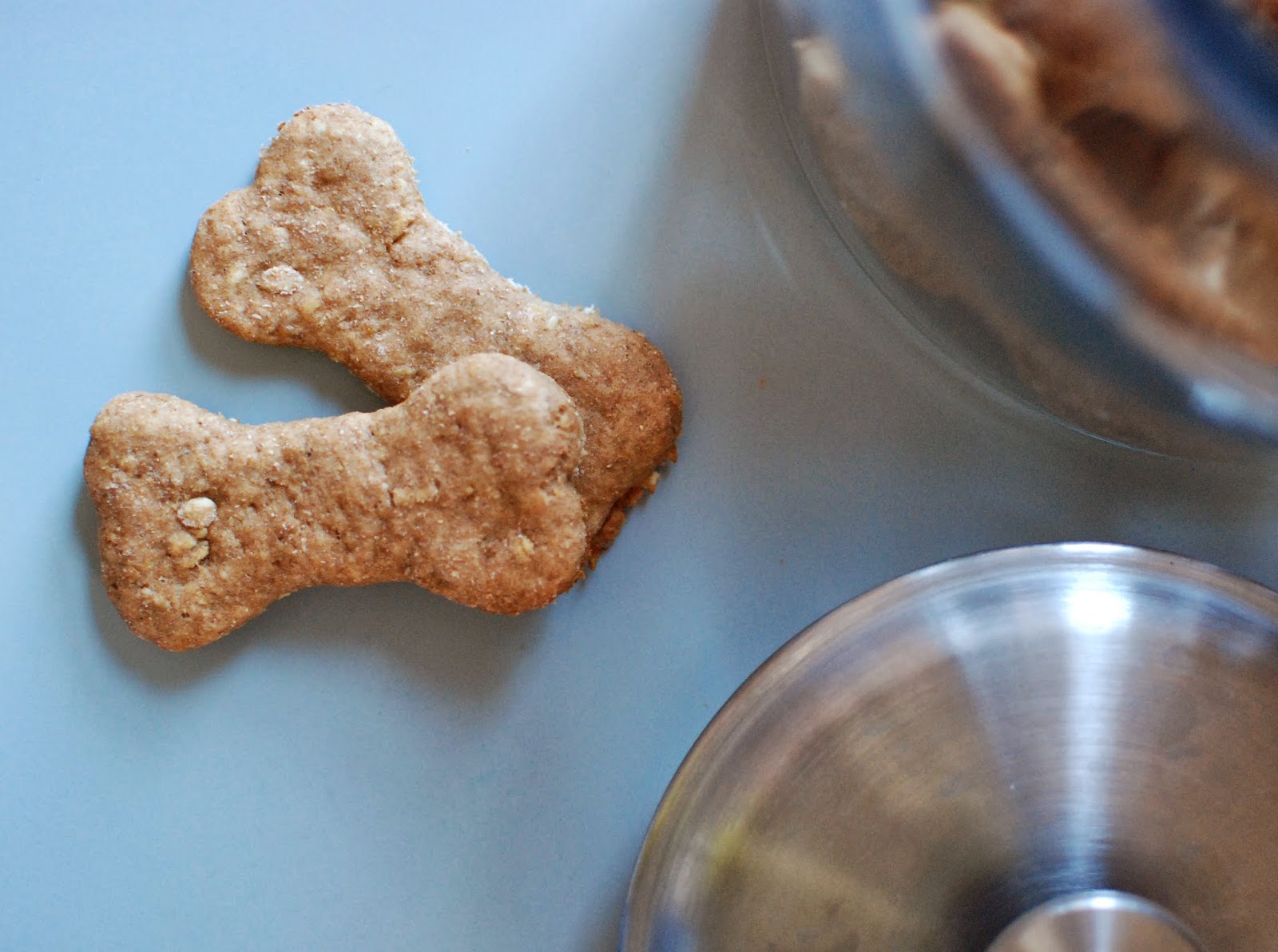 This past Sunday was Lilah's fifth birthday. While she is starting to grey a little in the chin, when most people ask us how old she is, they are shocked to find out that she's not one or two years of age. We've been told by many of our friends that she has mellowed out considerably in these five years, but she truly is one of the happiest dogs I've ever met and just doesn't slow down.

Andrew and I usually give Lilah something special for her birthday, so this year we decided to make her some biscuits. They were quick and simple to make and boy does she love them! Between her high level of energy and the fact that she snarfed her biscuit down so quickly, I gave up all hope of capturing a photo of her for this blog post. After glancing at several recipes, I decided that I could have a go at making my own concoction that would please Lilah based on some of her very favorite things. This recipe includes simple ingredients that you probably already have in your pantry, and is fairly healthy. Lilah will eat just about anything and can put on a few extra pounds quite quickly if we're not too careful, so I kept that in mind. In addition, we've still only been giving her one biscuit about every other day so as not to overdo it.

Preheat oven to 375 degrees. In a large bowl, mix flour, oats, and baking powder. Stir in the broth, peanut butter, and banana until the dough comes together. Form the dough into a ball on a floured counter. Kneed the dough for about 30 seconds to make the dough smooth. Using a rolling pin, roll the dough out to about a third of an inch thickness. Use a dog bone shaped cookie cutter to cut biscuits and place the biscuits on cookie sheets lined with parchment paper. Bake at 375 for 25-30 minutes until the biscuits are crunchy.

And from one dog family to another, we hope that your pups enjoy these biscuits as much as Lilah does!

Do you celebrate your dog's birthday? Have you made dog biscuits before? I'd love to hear about your recipes!

On this first day of summer, I can truly say that it feels as though the season has arrived. The menu sitting on our kitchen counter for this week's meal consisted of mostly grilled dishes. The flowers in our patio have grown from small sprouts to lush blooms. Summer cocktails or an evening beer have replaced glasses of red wine. And Lilah has assumed her favorite position atop the stairs leading from our deck to the patio.

Our summer evenings are our favorite. Dinners eaten on the patio. Baseball games listened to on our roof deck with a refreshing beer in hand. And maybe a bowl of ice cream for dessert. Not a whole lot needs to be done or said, but relaxing and enjoying the moment takes presidence instead.

This is probably supposed to be difficult. You know, writing about your life in 250 words. Mine's not so bad. My life hasn't been grand or fabulous. It hasn't always been easy-going either. But it has been a pretty awesome life.

I grew up in small-town Goshen, Indiana with my mom, dad, and sister. After years of the same school system, with the same people, and a city I didn't really like, I decided to apply to Syracuse University. If I got in, I'd attend. If I didn't, I'd work for a year and reassess. I got in.

I spent four years attending the university and one year living and working in a coffee shop in Syracuse. Four plus one is five. That last year? Andrew's fifth year of architecture school. I had met Andrew during our sophomore year. After he graduated, we found jobs. I entered a teacher residency program in Baltimore City-- what else was I supposed to do with an English major? I became a teacher and he got a job at a firm downtown. Two years later we got Lilah, our chocolate lab. Three years later, we bought a house. Three and half years later we got engaged. Four years later we got Finn, our orange tabby. And six years later? Well, that story will be soon to come....

And it will be amazing. I promise.

I know you all love teasers.

P.S. In case you wanted to know, this was Day 1 of Jenni's Blog Every Day in May.

What I've Been Up To

Happy end of Spring Break, guys! Or should I say, sad end of Spring Break? Today is my last day of break. And by last day, I mean that today was supposed to be a professional development day, but I needed a sick day to recoup from a very intense weekend that included the end of a visit with my sister and nephew and taking care of Andrew all Sunday while he was blowing chunks. Seriously, it was a draining last few days. Either way, the rest of the week was absolutely fabulous!

As a rundown, I finished my huge wholesale order for Urban Outfitters. My sister and nephew came to visit. We spent Thursday at the Science Center, which Jasper loved! He liked the dinosaur section the most where he spent a good half hour (at least!) brushing off the dinosaur bones and pretending to play paleontologist.

Friday afternoon, we headed to the aquarium and spent the later portion of the afternoon hanging out at my favorite coffee shop. When Andrew got home from work we spent the rest of the beautiful evening at the park.

Saturday morning, we headed down to DC. We had hoped to see the cherry blossoms blooming since my sister had never seen them before. We thought we would be lucky since many of the cherry blossoms in Baltimore are already in bloom, but alas they were not out yet. However, the weather was absolutely gorgeous-- the perfect day to be out and about on the National Mall where people were flying kites, enjoying, picnics, and Jasper got a chance to run around and play with Andrew.

After spending the day in DC, we headed to my aunt and uncle's house in nearby Hyattsville, Maryland for dinner. Sunday was a low key day hanging out in the house. Jasper loved playing with Lilah.

All around, it was a good week!

What have you been up to this past week? I feel as though I am out of the loop right now!